Skip to content
As Coronavirus spreads across the globe the need for respirators is higher than ever, particularly within the NHS.
Unfortunately, there are some people who are exploiting the situation and are selling N95 masks that have been falsely certified as FFP respirators. Even though the World Health Organisation (WHO) have approved the N95 masks in other parts of the world, they do not meet the EN149 standard. This is a legal requirement when selling a respirator as an approved item of RPE in the UK.
Fake certificates have been uncovered for N95 masks which falsely claims that they have recently been tested and certified to meet EN149 but this is a process that can take several months.
According to the European Safety Federation, they have seen ‘certificates’ on letterheads (or using their logo and/or name) of the following institutes based in Europe:
• ICR Polska
• CELAB – see statement on their webpage
• ISET (Instituto Servizi Europei Technologici) – on their website they have a page with false certificates
• ECM (Ente Certificazione Macchine) – also a picture of a mask with identification number of the notified body ECM 1282 next to CE – ECM is not a notified body for PPE, so this marking is certainly not valid
• NPS
• Amtre Veritas
• STS Inspection and Certification
• VIC Testing and Certification
• BSI : we have also added an example of a ‘certificate of compliance’ issued by ‘BSI, London’ which is clearly (and confirmed by them) not issued by the Notified Body for PPE BSI.
• BSI : we have an example of a BSI EU Type Examination Certificate that has clearly been changed and is thus a fake document – this is confirmed by the Notified Body for PPE BSI.
They have also seen ‘certificates’ on letterheads (or using their logo and/or name) of the following institutes based in China:
• CIC (Shenzhen CIC Testing Technology)
• Huaxun (Shenzhen HX Detect Certification)
• ENC (East Notice Certification Service)
• HTT (Shenzhen HTT Technology)
• ITC (Shenzhen ITC Product Testing)
• BTK (Guangzhou Bestek Testing Services)
• Micez (Shanghai MICEZ Testing & Technical)
• Huawin (Shenzhen Huawin Testing Certification)
• LTT (Shengzhen LTT Testing Technology)
• AST.LAB (Aerospace Testing Technology (Shenzhen)
A ‘declaration of conformity’ on letterhead of institutes (or using their logo and/or name) that are clearly not compliant with the EU PPE legislation:
• Nova Certification (based in Greece) – the Notified Body Nova (not notified for PPE assessment but for other types of products) confirmed that the example of the ‘declaration of conformity’ is a fake document
• GTS (Global Testing Services, based in China) 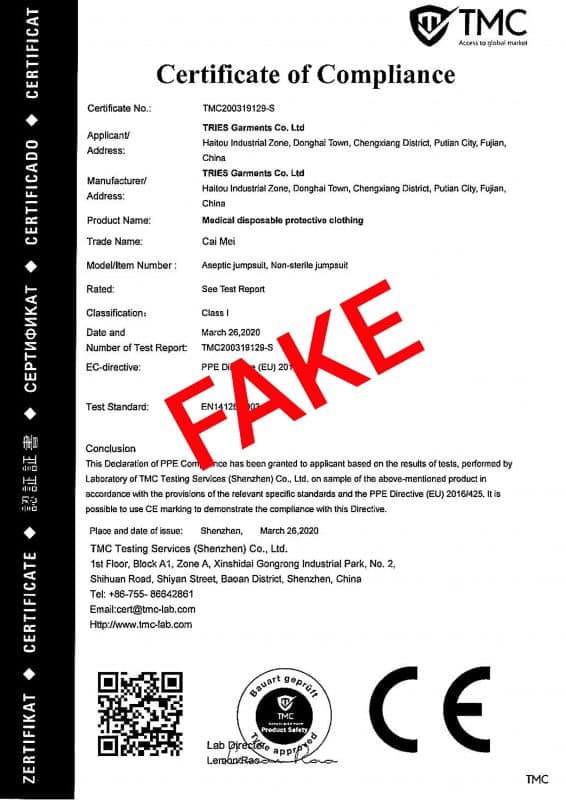 There is evidence to suggest that manufacturers outside the EU are not entirely familiar with the EU Legislation on PPE and believe that by paying for these false certificates, they are fully compliant with the EU legislation. Many of those who require these products are not aware about the exact requirements of the EU legislation and in turn accept those documents to be accurate.
FFP2/FFP3 masks are PPE category III according to the Regulation (EU)2016/425. This means that the conformity assessment includes a type examination by a notified body, resulting in a ‘EU type examination certificate’ as well as production follow-up by a notified body (random checks or system audit). This results in CE marking with the number of the notified body responsible for the production follow-up next to the CE marking. The manufacturer is obliged to issue the EU Declaration of Conformity, which must accompany the PPE, together with the instructions for use. (source – click here)
It is vital to ensure that any certificates you receive for the PPE are correctly titled ‘EU type examination certificate’ and that they are issued by a competent Notified Body. The identification number of the Notified Body must also be included in the EU type examination certificate.
A full list of Notified Bodies is available on the NANDO database
You can also check the authenticity of certificates through the following portals:
BSI Certificates
INSPEC Certificates: [email protected]
Supplying the NHS is a matter of urgency, but the importance of compliance and correct certification must not be forgotten. These PPE products are designed and tested to provide the ultimate protection to the wearer. The individual’s safety must not be compromised by supplying them with PPE that is not fit for purpose. If you have any doubt surrounding the compliance of an item of PPE or RPE, please speak to one of our technical specialists who can advise and educate you on such a critical matter.